One year ago, Chick-fil-A opened its first location in Vine City, a neighborhood in Atlanta’s historic Westside community. The reason? To stand as a symbol of Chick-fil-A’s continued commitment to helping restore this community.

To commemorate the one-year anniversary of Chick-fil-A Vine City, Operator Quincy L.A. Springs IV, Chick-fil-A CEO Dan Cathy and leaders from the Chick-fil-A Foundation hosted more than 100 Atlanta business and community leaders on February 19 to unveil a new community room in the restaurant. Named after legendary Atlantan Herman J. Russell, Sr, the H.J. Russell Community Room features a mural honoring Russell’s life.  Russell served as the first black member of the Atlanta Chamber of Commerce and was the second African-American to serve as its president. The company Russell founded in 1952, H.J. Russell & Company, continues to be one of the most successful minority-owned real estate development and construction businesses in Atlanta. Russell also played an active role in the civil rights movement, helping post bail for many who were imprisoned. The mural celebrates his legacy with images depicting various stages in Russell’s life, along with quotes from him, his friends and his family. 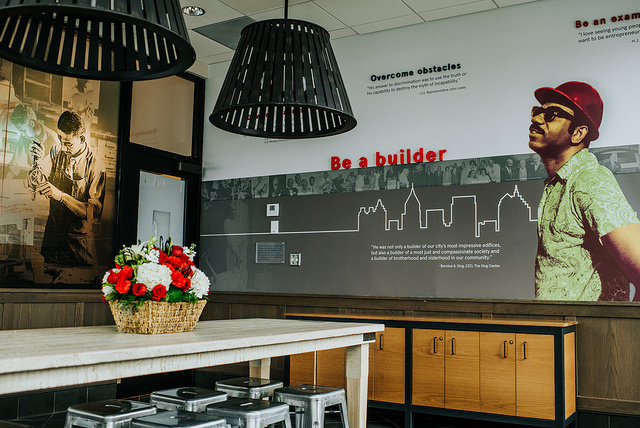 Atlanta’s Westside was home to H.J. Russell as well as many civil rights leaders such as Dr. Martin Luther King Jr., Maynard Jackson and Julian Bond. The neighborhood is credited with being the “birthplace of the civil rights movement.” However, today it faces challenges, with 60 percent of children living below the poverty line and one-third of the homes vacant.

The location of the Vine City Chick-fil-A and the H.J. Russell Community Room is significant in many ways. It sits on land owned by the Russell Family. It’s in the heart of the Vine City community, along the Martin Luther King Jr. Drive corridor. And, it is across the street from the now-abandoned, but once iconic Paschal’s Motor Hotel and Restaurant – which served as an epicenter and meeting space for the civil rights movement.

“I want the children of this community to know the heritage of the neighborhood and have the pride of knowing that giants walked the same streets they play on,” said Quincy L.A. Springs IV, the local franchise Operator of Chick-fil-A Vine City. ”When it comes to the historic Westside, the whole is greater than the sum of its parts. The amount of love, pride of place and genuine caring for others makes it feel like home to me. This community is so rich in spirit, and my hope is that my restaurant can be a gathering place for my neighbors and friends.” 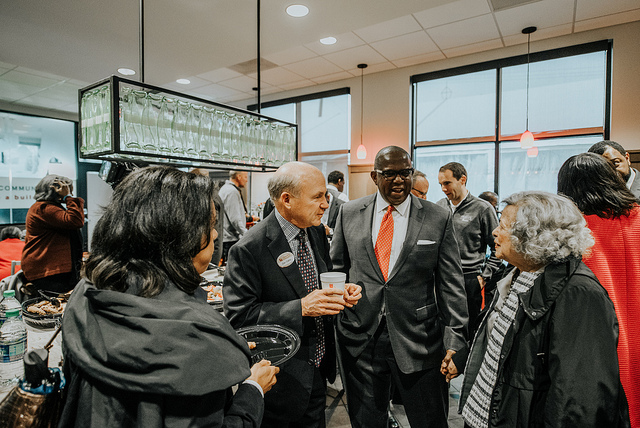 Just as H.J Russell served as a catalyst for change in civil rights era Atlanta, the Vine City Chick-fil-A has energized a change in the area’s economic climate. Since the doors opened in 2018, the restaurant has created more than 90 jobs in the community and supported in other ways like food donations to local organizations, youth mentorship and donations to youth camps. And, at least four more businesses have opened within walking distance of the restaurant, bringing new opportunities to the community.

The revitalization effort, led by organizations such as the Westside Future Fund, has made great strides in revealing the potential of the neighborhood. Alongside the Westside Future Fund, Chick-fil-A and the Chick-fil-A Foundation has actively supported the community through efforts including employee volunteerism, youth sports camps, meal packing, donation drives, student mentorship, helping to fund a new school-centered health clinic, and hosting a campout for Atlanta CEOs to urge a collective commitment to restoring the Westside.

"Finally, we’re going to be able to address some of the latent problems we have on the Westside of Atlanta," Dan Cathy said in August at The Atlanta Business Chronicle’s Most Admired CEO Awards banquet. "A whole section of Atlanta that has been left behind, and with the Beltline, the Mercedes-Benz Stadium, with urbanism, with the growth in residential construction that’s going on in apartments -- we’re going to be able to provide affordable living for the longtime residents of the Westside. So, it’s a very exciting time for Atlanta.” 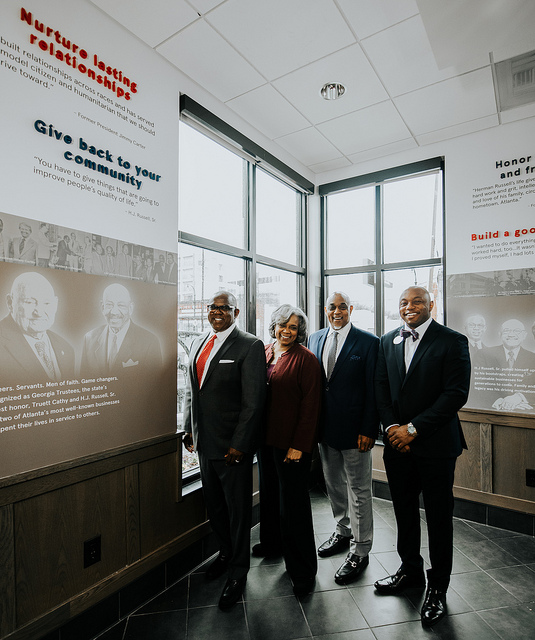 In March, the Chick-fil-A Foundation and the Mercedes-Benz Stadium will host the inaugural Beloved Benefit, a fundraiser to raise visibility for and celebrate the outstanding work underway to revitalize the historic neighborhood. The event, led by Ambassador Andrew Young, Bernice King, Arthur M. Blank and Dan Cathy, will bring all of Atlanta together — citizen and celebrities, leaders and residents, clergy and professionals — to unite around Atlanta’s Westside. All funding raised during the benefit will be donated directly to nonprofits in the Westside community.

Atlanta is a dynamic city and ever-changing in the direction of sustainable growth. The development of the Westside is just the beginning, with promise of a better future.

Click to learn more about the Chick-fil-A Foundation’s efforts in the Westside community.